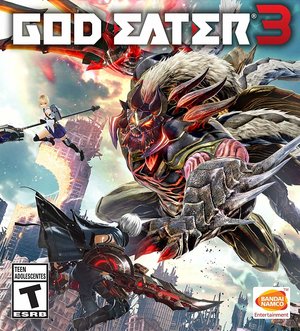 God Eater 3 is an action role-playing game developed by Marvelous and published by Bandai Namco Entertainment. The third main entry in the God Eater series, the game was released for PlayStation 4 in Japan in December 2018, and worldwide in February 2019 for PlayStation and Microsoft Windows, with a Nintendo Switch version released in July 2019.

Like its predecessor, the game is an action role-playing game with hack and slash gameplay. Players are equipped with God Arc weapons which can be transformed. In the game, players are tasked to hunt massive monsters known as Aragami. The player character is a God Eater who can absorb energy from monsters to unleash "burst moves", special attacks that deal a lot of damage to enemies.